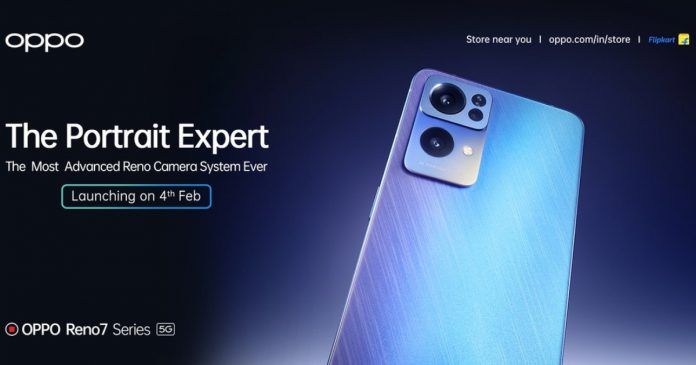 Oppo has confirmed the launch date of the Reno 7 series. The company will unveil its new premium Reno smartphones in India on February 4. At the launch, the company is expected to launch at least two new smartphones. These include the vanilla Reno 7 and the 7 Pro.

Both Reno smartphones have been launched in China. The Reno 7 series is said to be the first smartphone in the world to feature a Sony IMX707 camera sensor. The devices also come with a triple-camera setup on the back. Let’s take a look at the Oppo Reno 7 series launch details, specifications and features.

Oppo Reno 7 series will debut in India on February 4. The premium Oppo smartphones will be available for purchase via Flipkart. The India variant is likely to come with the same specs available on the Chinese model. The Reno 7 Pro has a 6.55-inch AMOLED display with 120Hz refresh rate support. It has a Full HD+ resolution and comes with a hole punch cutout at the top left corner of the screen. The display also has a layer of Gorilla Glass 5.

Under the hood, the Pro model has a MediaTek Dimensity 1200 Max. It comes with 8GB of RAM and 256GB of internal storage in China. The India variant is expected to feature the same. The phone packs a 4,500 mAh battery with 65W fast charging support.

On the back, there is a triple-camera setup. The phone has a 50MP Sony IMX766 camera, coupled with an 8MP ultra-wide camera and a 2MP macro camera. The front camera has a 32MP Sony IMX709 sensor.

The vanilla model, on the other hand, has a smaller 6.43-inch AMOLED display with a 90Hz refresh rate support. The screen is flat and comes with a peak brightness of 600 nits. It draws power from a Qualcomm Snapdragon 778G processor, coupled with Adreno 642L GPU.

The phone is likely to launch in India with 8GB of RAM and up to 256GB of internal storage. Like the 7 Pro, the vanilla Reno 7 also packs a 4,500mAh battery but this one supports 60W fast charging.

It comes with a triple-camera setup on the back with the same camera setup as the Pro model. You get a 50MP main camera, an 8MP ultrawide camera, and a 2MP macro camera. Both phones run Android 11-based ColorOS 12 out of the box.